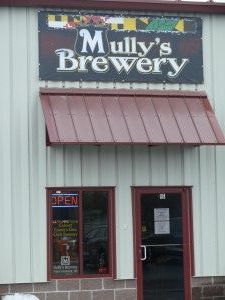 Looking for something to do on a snowy Saturday, my husband, mother in law, and I headed over to Mullys Brewery. The southern Maryland craft brewery is new to Calvert County and is located in Prince Frederick, MD. You will find it off the beaten path located on 231 in the Industrial Park. You cannot see it from the road so without someone telling you about it you would not even know this hidden gem exists. The family owned Craft Brewery opened this past summer 2013.

Upon walking into the tasting room we were greeted by a warm smile and friendly face, we later found out this was the father of the owner. For $5 we got a sampling glass to keep and six tokens. Each token is good for one sample of your choice. We sampled 5 different beers. 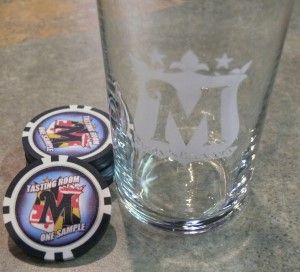 The first beer we tried, Marc Six Blonde (4.9% ABV), was a pale golden ale. This was by far my favorite of all the beers. Moving on we sampled CarmeLite Wheat (5%). This is a German style beer brewed with the purpose of retaining some yeast. Next up was the Patuxent Pale Ale (4.9%), flavored with flowery and citrus hops. This beer had a very strong flavor. We then sampled the Jack Straw IPA (6.2%). This was the only beer not on tap and they graciously poured a sample from a bottle they had in stock. This IPA is one of their most popular thus they had run out stock on tap. If you like IPA style beers you’ll definitely want to try this one. The final beer we tasted was the Shucker Stout (5.3%). This was a dark roast beer. For all you coffee lovers, this is the beer for you. It has a nice coffee flavor to it coming from the rich dark roasted barley. Mully’s recommends oysters as a nice pairing (note the name Shucker Stout as in someone who shucks oysters). I think this stout would also be delish with a burger and fries.

Speaking about food, Mully’s does not serve food, but they do have various vendors that setup on the weekends to compliment your tasting experience. You can experience dishes like BBQ pulled pork sandwiches or fish tacos depending on the caterer for that weekend. 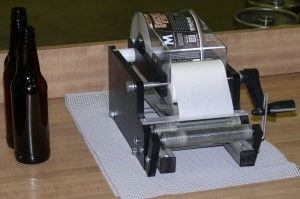 After finishing our samples, we were taken on a tour of the brewery. The owner was our tour guide for the trip. We learned a lot of interesting facts about the brewing process. A standard batch size makes 465 gallons of beer. After the brew process is complete Mully’s hand labels each bottle and then uses an automated filler and capper. They even give back to the local community by donating the used grains to local farmers to supplement their feed. 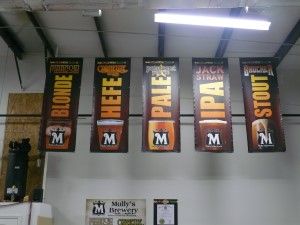 Mullys brews are award winning, the Shucker Stout and Carmelite Wheat won a silver medal in the Dublin Craft Beer Cup held in early 2014. The Jack Straw IPA received a bronze medal in the same competition.

If you love craft beer give Mully’s a try. Once you have found your favorite(s) beer you can purchase a growler or mix and match a six pack to go. Keep your eyes peeled for your favorite beer at restaurants and liquor stores around the county.

What’s your favorite Mullys Brewery brew? Tell us in a comment below.

Melissa is a Charles County school teacher. She has lived in Calvert her entire life and is happily married to Clif Bridegum, the founder of Your Calvert. She enjoys exploring all the great things Calvert has to offer with her three puppies! See more on G+.