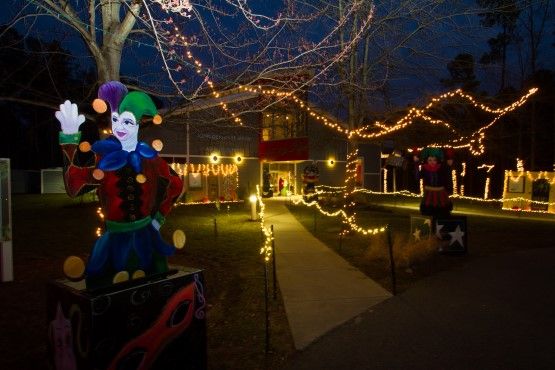 After living in foreign countries and many states, I don’t like to use superlatives. “The best” seems subjective between cultures and locations, but I have to use it now, because not only was United Way’s annual Mardi Gras the first Mardi Gras party that I’ve ever attended, it was also the overall best party that I’ve ever attended. Truly, everything from the food to the decor, the music and the people were absolutely perfect. 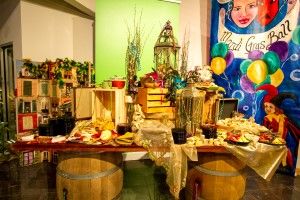 This was the first year that it was hosted at Annemarie Gardens, a place that’s beautiful anyway. The trees were lit with white lights as I drove in and beautiful painted figures lined the pathway inside. I was greeted by what I thought was a very ornate statue, so I took its picture. Later, he smiled and waved at me as he walked by. A stilt walker, not a statue, Michael Horne spent half the night interacting silently with the crowd, towering over them on stilts, then the other half on his feet painting faces on the balcony.

Arriving early, I saw the food at its absolute best, artistically arranged, around the venue. Trying as much as I could stuff in, I can tell you it was as delicious as it was beautifully presented. Maryland Country Caterers set up four food stations serving breads, cheeses and dips at one, a Mongolian grill at another, a delicious Cajun style pasta bar at the third, and a whole leg of beef with sides at the fourth. Too full, I never did try the appetizers that waiters brought around on trays. This is the stuff great restaurants are made of. For dessert, there was a long make-your-own s’more bar in one room and a flaming donut (yum) bar in another. Served with a chocolate chip cookie hot from a skillet, it was deadly. 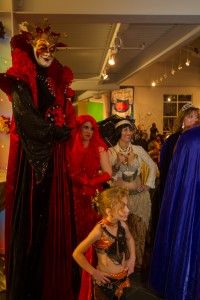 Fantasy World Entertainment, another local business, set up an incredible space “outside” the building called the Red Room Lounge. It was connected to doors leading out, but heated and decorated so exquisitely that it didn’t seem like we were in a tent at all. The “lounge” space had a smaller stage and second bar with live music and, later in the evening, a burlesque show.

The open bars made drinks as requested, but also served local Calvert County wines from Running Hare Vineyard and two special fruity drinks that went quickly. The main stage played live music by the Moonshine Society that got everyone up dancing, so that much of the night, the dance floor was full and people were having a great time. The annual crowning of the Mardi Gras King and Queen, a live auction, and the drawing for the jewelry raffle (beautiful things), broke up the night with Laurynn Rickettes of WJLA 7 acting as MC for several events.

Overall, the decorations and entertainment coupled with delicious food set the stage for this event that went off without a hitch. This wasn’t a stuffy party. People dressed up, then smiled, danced, and had a marvelous time, Mardi Gras beads, masks, and all!

If you get a chance next year, go. The food and entertainment alone is worth it and it raises money for the United Way that serves charities within Calvert County. If you did share your favorite moment from the event in a comment below!

Below is a slideshow of the 300+ photos that I took for Your Calvert.

You can access the original images (full size & resolution) on our flickr page by clicking here. These photos are being licensed under the Creative Commons Attribution No-Commercial license. A human readable version can be found at creativecommons.org/licenses/by-nc/3.0. Per the license, a link back to https://www.yourcalvert.com (or any page thereof) is required for webpages that use these photos or for print items credit must be given to Tiffany Stahlbaum – YourCalvert.com.