You are here: Home / Recreation / Travel Back In Time At The Chesapeake Beach Railway Museum 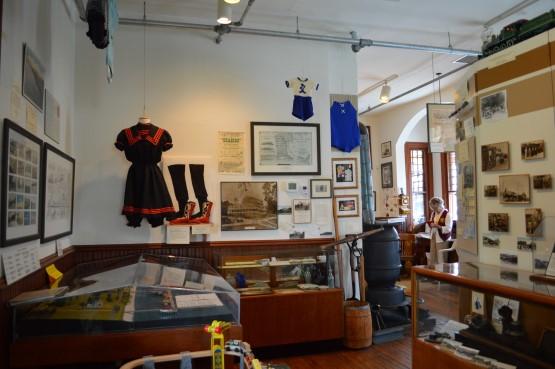 I love seaside resort towns, especially ones that have an old-timey atmosphere. That’s why I would love to go back in time about a century or so to see Chesapeake Beach in its heyday: the train steaming into the station, the people enjoying the various amusements and the beach, the elaborate swimming costumes worn by the men and women. But since I can’t do that, I must be content with a visit to the Chesapeake Beach Railway Museum.

The resort town that attracted residents of D.C. and Baltimore at the turn of the 20th century was designed in the 1890’s. In addition to the elegant beachfront hotels, Chesapeake Beach had an extensive boardwalk that featured a carousel, roller coaster, bowling alley, band shell and dance pavilion, among other attractions. The town also had a race track and casino. Naturally, people also came for the beach.

The old train station offers a glimpse into this Chesapeake Beach of yesteryear, which is very different from today. You not only get a sense of what the train station was like and who the people were that came to Chesapeake Beach, but you can view a scale model of the 1600-foot boardwalk and its many attractions.

Additionally, there are vintage bathing suits, photographs and other artifacts from train travelers, beach goers and some of the local businesses. You can also see the kangaroo from the carousel in addition to many lanterns, signals, signs and other equipment used by the railway.

As a writer, I was particularly interested in the impressive number of postcards on display. It’s fun to read the little snippets written by people who lived during that time, and these postcards offer even more insight into what Chesapeake Beach was like back then and who the people were that visited.

If you haven’t been to this museum yet, it’s worth the time, especially if you’re interested in history. It’s not big, so you can get through it within an hour or two. Plus, it’s free!