You are here: Home / Events / Sharkfest At Calvert Marine Museum 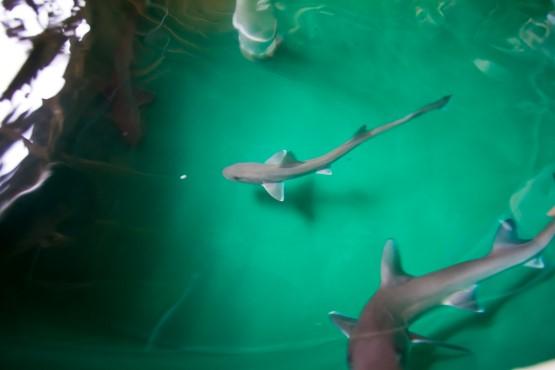 The Calvert Marine Museum hosted the annual Sharkfest the other weekend, so we went to check it out and learn more about our favorite ocean predator.

It’s strange to think that the Chesapeake was full of sharks, but the proof is here on our beaches and at this museum. The fossil rooms do a great job showing what lived here millions of years ago, and during the Sharkfest those rooms are full of extras including an impressive shark teeth collection with several enormous Megalodon teeth. Paleontologists even showed the progress they’re making on a fossilized whale jawbone and explained the process to the kids.

We learned about the sixth sense, how a license plate can look like a fish, why toilets are more dangerous than sharks, and how many teeth a whale shark has.

The only crowds were at the Corbin Pavilion where we lined up to see live sharks. There were tanks of Atlantic sturgeon, chain dogfish, and the dogfish shark. New this year, the docile dogfish sharks swam close to the surface and poked their noses out of the water allowing us to gently touch them as they swam by. The kids loved that. 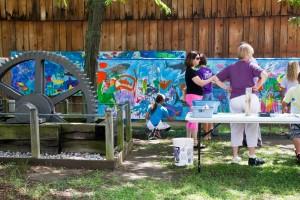 The Sharkfest is great for young children too. Not only do they enjoy the live shark experience, but inside they can do crafts like paper hats and outside there are games like pin the fin on the shark, a sorting game, and a beanbag toss. They’re also invited to help paint a large mural at the entrance next to where last year’s mural still hangs. There are even free canoe rides.

All the special Sharkfest activities are included in the regular admission prices except face painting which is $5 extra. The small watercraft building, the Drum Point Lighthouse, and the Lore Oyster House are all open so you can easily make a day of it.