You are here: Home / Featured / Letterboxing In Calvert County MD: The Pleasure Of Finding Hidden Treasure 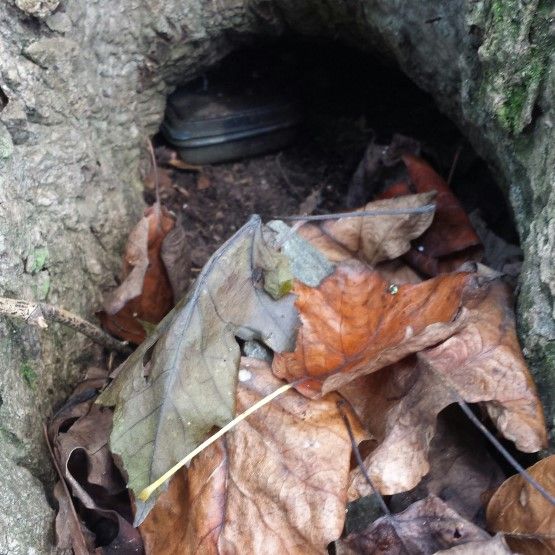 Using directions from the Internet, I found the parking lot where I was instructed to park and counted 20 paces from the pile of rocks at the edge of the lot. There was the tree, just as described. Would the box still be there?

I saw the rock and the pile of leaves that were mentioned in the instructions. It took another few seconds, but then I saw it – a small Tupperware container nestled in the hollow of the tree. It was filthy, and it took some effort to get the lid off. But once I pried it open, I found the little notebook with pages of colorful stamps and messages left behind by fellow treasure hunters.

It was my first time letterboxing, and it was pretty cool.

Letterboxing involves following clues or solving puzzles on different websites or in print guides. The clues lead to a box hidden in a public place, such as a park. Unlike geocaching, you do not use a GPS. 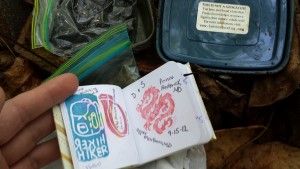 The box typically contains a small notebook and a unique handmade stamp. Finders use the stamp to make an imprint in a personal journal as a record of their find. They generally have their own signature stamp, which they use to make an imprint in the notebook contained inside the box. Then they place all the contents back in the box and leave it for the next person to find.

Letterboxing originated in England in the 19th century and didn’t become a widespread pastime in the U.S. until 1998, when it was featured in Smithsonian Magazine. Some letterboxers hold gatherings, but it can also be a solitary pastime. It’s a great family or Scouting activity.

There are several letterboxes hidden around Calvert County. (I won’t tell you where I found the one above, but I wrote my name in it. Let me know if you find it.) If you think you might be interested in trying letterboxing, these two websites are a great place to start and offer clues to where you’ll find ones locally: