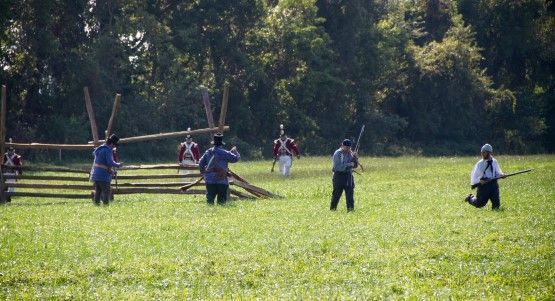 Until living in Maryland, historical reenactment were events I’d only seen on television. In all honesty, they looked boring, but then I moved to historically rich Calvert County and attended my first battle reenactment at Jefferson Patterson Park. It’s anything but boring. 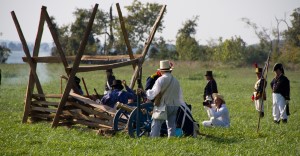 The reenactments happen in a large field during certain times of day, so if you’re intent on seeing one, you’ll need to check the schedule and plan ahead, because really, you shouldn’t miss it. The troops clad in period attire spend time at their tents during the day waiting for the battle time, then march out to the field and begin. The canons are loud and smoky. The advances are slow. Crowds line up along the side and watch a battle that is just long enough to be interesting, but doesn’t drag on. Even my girls enjoyed it and learned more than they would from a book.

Though the battle is interesting, I really love the fair. With tools and handcrafts, entertainment and historians, it’s an interesting mix of information and activities that can appeal to many. The people running these booths are very friendly and happy to share what they know about 1800s Maryland. It’s fun.

My girls made corn husk dolls and practiced writing with a quill pen. They learned polish checkers and how to weave rope. A violinist played while teaching a traditional dance with both adults and children joining in. We even saw lace making, basket weaving, needlepoint, and how to use a spinning wheel. 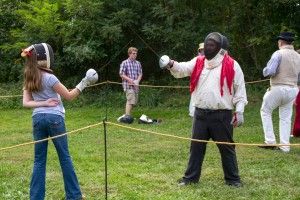 Near the Farm Exhibit, the fencing club teaches fencing techniques and lets you try your hand at the sport while women practice hand crafts and men explain some of the original weapons they’ve collected. If you head over to one of the encampments, the militia will talk to you at length about how they lived at the time. 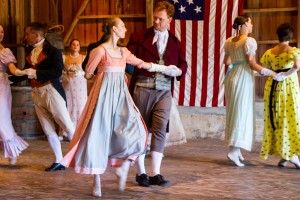 At the end of the day, we relaxed in the shade of the barn and enjoyed period music, singing, and dancing. This is where they set up games on the tables for the annual Tavern Night, JefPat’s annual fundraiser, but in the day, you can enjoy the music too.

Spend two hours or all day, but do go at least once. This is an extremely well done all ages event. Food is available for cash, but you can also bring a picnic. Parking is easy and free.