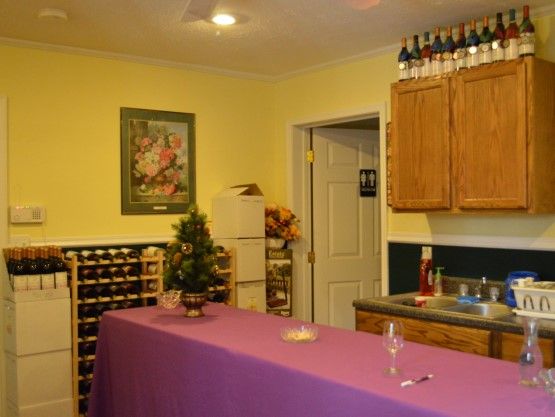 Those of you who have been following along for some time may know that I’ve been covering all of Calvert County’s wineries. Well, now we’re down to the last (but not least!): Cove Point Winery. Not only is it the first winery to be bonded and licensed in Calvert County, but it’s the first in Southern Maryland. Cove Point Winery got its start in 2004.

If you haven’t been to this winery yet, you’ll find it in a residential area just across from Cove Point Park and down the road a bit from Cove Point Lighthouse. Don’t be intimidated by the fact that it’s at the owner’s house. It’s in a separate building on the property, with space available for a few cars to park. 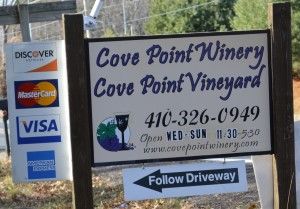 The tasting room isn’t much to look at on the outside, but what it lacks in style it makes up for in substance. For $4, I was invited to try 15 different wines (with a souvenir glass to take home). However, I was flying solo on this visit and had to drive, so I asked if I could try just a few. I was then informed that I could sample 4 wines for free.

I chose from the off-dry and sweet whites menu: Cove Point White, Symphony (my favorite, and one of their best sellers), Gewurztraminer and Peach Shard (a blend of Chardonnay and Peach wine). All were good and well-priced. Those with different preferences can try dry whites, dry reds, dessert wines, and a large selection of their fruity Lighthouse Mists (FYI: the Blackberry Merlot is great to use in slow cooker pot roast).

Cove Point makes wines that are common and popular for this region, but the winemaker is also interested in offering something a bit different. One example of this is Blaufrankisch, a red wine typically found in Central Europe.

If you can’t make it to the tasting room, Cove Point Winery frequently pours samples at local events. You can also find their wines in liquor stores around Calvert County.