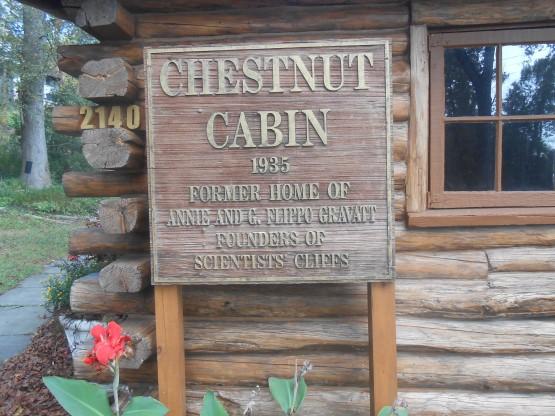 Referred to by some as one of the first “planned communities” in the area, Scientists’ Cliffs is a development in Port Republic off Parker’s Creek Road. Those familiar with the “white barn” at the intersection of Broomes Island Road and Route 4, and traveling south from Prince Frederick, will find Parker’s Creek Road about a half mile south of the crossing.

Forest pathologists G. Flippo Gravatt and his wife Annie actively sought land in 1935 for a summer oasis. Their plan was to develop a community where they could be surrounded by like-minded scientists and professionals. The couple purchased 238 acres of forests, trails, steams and cliffs overlooking the Chesapeake Bay which is now known as Scientists’ Cliffs, according to the Scientists’ Cliffs Association booklet. They and their extended family members added to the original purchase 1936 and 1961 to span 752 acres.

The original homeowners and members were scientists, but later included college graduates and those without degrees if they had achieved some status of recognition within their professions). In addition, owners could vote to allow on non-college-degree family members to purchase land and build a home in the development. 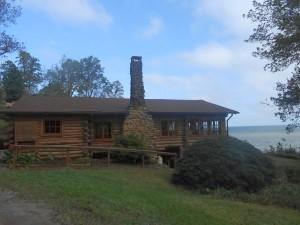 Within the first year, the Gravatt residence, called “Chestnut Cabin”, five smaller cabins and a few larger cabins were built on the land. Originally the community was primarily a retreat for Washington, D.C. residents and employees. Therefore the overall style of architecture is reminiscent of summer beach cabins. The exteriors of the homes are often wood siding, or logs with earth colors bending in to the trees which surround them. The size and style of the homes range from small cabins to multi-level homes. Occasionally, a home will stand out, like a New England beach cottage with grey siding and white trim. On average, the price of the homes range between $275,000 to $599,000 depending upon on factors such as size and proximity to the bay.

The original residents shared a common interest in planting gardens providing a legacy of numerous plants, flowers and trees. In one section of the community bamboo grows thick and wild. Some planting is contained in designated community garden areas while almost every home has its own distinct personality reflected by the type of flowers, bushes and trees surround it.

The community has five gates to access the different sections of homes. Gates, labeled A, B, C, D and E have street names with the same first letter and are the names of flowers or trees. For example, within Gate A are Apple Road, Aspen Road and Azalea Road. In Gate B are Birch and Bluebell Roads.

The community has governed itself since 1937 with the establishment of an association for the “homesite owners”.

The Gravatt’s original home (the Chestnut House) is now a museum, preserving the history and artifacts of the community and can be rented to the residents for small social gatherings. The community has a community house for larger gatherings such as community meetings, pot-lucks, summer activities for the kids, and has been used for dances, weddings and plays. Around the community house is a pool, tennis court and playground.

The association owns a historic tobacco barn built in 1847. The structure is used for “lightly for storage” of crab nets and has housed the association’s tractor and equipment.

The development sits on approximately two miles of bay front. Although some beach access is very narrow along the cliffs, one area in particular has a large beach area for community residents to hang out and store their boats and equipment sheds.

The residents have an independent water plant and distribution system, which is maintained by the association’s staff. The community remains private with a requirement that vehicles authorized to be within the structure have a special association decal. 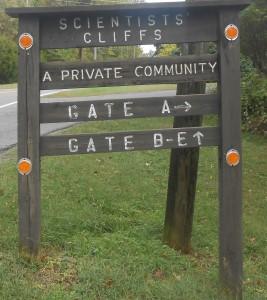 Immediately outside its gates are self-guided trails through the American Chestnut Land Trust’s 3,000 acres. Further up the road is Parker’s Creek, a spot for canoe rides along the waterways Captain John Smith once glided over. Across Route 4 is access to Broomes Island and all its offerings. Residents of Scientists Cliffs are about 15 minutes away from Prince Frederick and 20 or so minutes from Solomons Island.

Scientists Cliffs is a community filled with history and masterfully planned. If you like log homes, being by the water, or the large community feel consider Scientist Cliffs in Port Republic, MD 20676.

If you live in or have lived in Scientists Cliffs and want to share any additional information please leave a comment below.