You are here: Home / Featured / Awakening The Child In All Of Us At Tans Cycles Parts 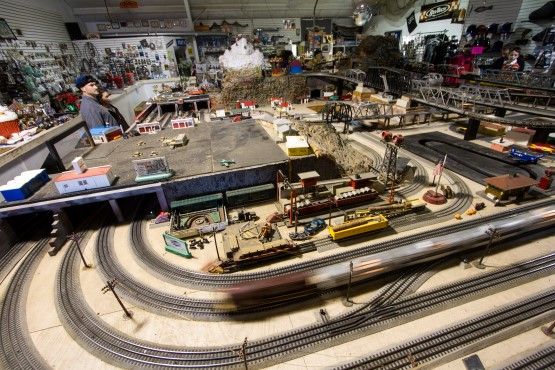 There’s something magical about a truly spectacular train set: the movement of the trains, the details in the buildings, the lights and smoke and surprises you find when you really look. I really don’t normally get excited by trains, but in North Beach, hidden away in a nondescript building, is by far the most intricate display that I’ve ever seen. 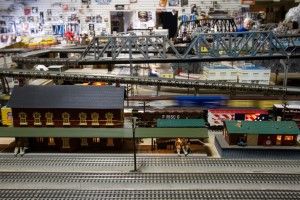 My girls didn’t want to go in because they thought it would be boring, but while I talked to Ralph Carrello, they circled several times then excitedly drug me along.

Tom, Tams owner, got his first train as a gift from his grandfather when he was a boy and has been collecting ever since. In 2000, he set up his first train display, a 4×8 little town, and received a great response, so he just kept adding. Over the years it’s grown, so that now, with help and contributions from his friends, he’s been able to create a 20×20, 690 square foot world with 5 levels, 25 trains, and so much detail, you really need to loop around twice to take it all in. 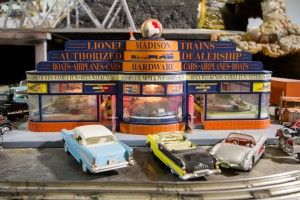 You’ll see a carnival scene that moves and lights up with Jane Carrello’s “girlie train” running around it. Her husband was the engineer today and showed me the 18 transformers that help run it all and the different scents of smoke. Today the big black steam engine circled the track with cinnamon roll scented smoke. Ralph’s been collecting trains for 60 years.

On the mountain, you’ll see a diner with the world’s smallest trains. Look inside and you’ll see them running too through a mountain just like the large ones looping around the diner itself. Ice skaters twirl, skiers slide down the mountain, and fire fighters put out a fire. Kids of all ages will love this set with so much detail and little ones will enjoy the little openings with moving trains and scenes too short for most adults to even notice. 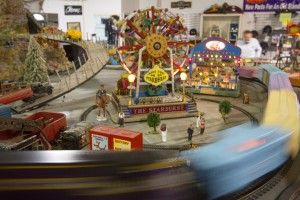 Schools plan field trips and visitors come daily to enjoy this free display that has been created with so much love. The men and women who’ve put it together are rewarded by the joy on people’s faces.

Every year it grows and changes, so it’s something to come back to. This year, this free display is open until January 18, so you still have time. Come back in the year to see the Easter train, 4 of July train, and Circus train as well and to meet the people who have put it together.